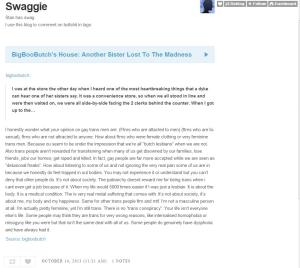 I found this response to my post, Another Sister Lost To The Madness on my Tumblr interesting for a couple of reasons.

First, it is clearly a troll account as the person describes her blog as something she uses to “comment on bullshit tags.” So she clearly isn’t really interested in anything I have to say, she just wants to play the oppression Olympics and prove that she has it worse off then everyone else, which is common with people suffering from a trans delusion.

Secondly, while she starts off saying that she would like my opinion on certain things, she spends the rest of her post trying to shame me for my very valid opinions based on a lot of years of lived experience as a butch lesbian.

The rest of her post is filled with a lot of things trans people say to me when trying to “make me see the error of my ways” in my opinion about transgenderism. She complains about how trans people are treated while completely ignoring what gay people go through because, with trans people, it really is all about them.

Of course, the rest of her post is the typical narcissism that we see with trans people, the accusations that I am speaking for all people, the assertion that I have no sympathy or empathy for trans people, the complaints about how we lesbians just don’t get it and have such easier lives, the assumptions of what it is I think when I never said anything of the sort, etc.

Here’s the thing, Swag. From your post, it sounds like you are a young straight woman who is unhappy with her life. I would venture to guess that you have been subjected to a lot of sexism in your young life and were under the belief that living as a man would make things easier for you but you are now faced with a very harsh reality that giving up on the woman that you are means you gave up the power you had inside of you to deal with said sexism. Or perhaps you thought being trans would make you “special” or unique and now you are feeling the opposite of that and are struggling.

Either way, I feel very badly for you and wish that you could see that conforming to the binary and trying to “be a man” was just a cop out for you. You have a lot of choices and this one, it’s a really bad one.

Yes, being trans is about society, it is about the patriarchy, it is about conforming. Gender is nothing more than a social construct based on the sexual stereotypes put forth by this patriarchal, misogynistic society; and you, my friend, have bought into that, hook, line, and sinker. When a person gets so completely caught in the gender shell game of biological stereotypes, they assume that to dress this way or to enjoy these things, etc. then they must be the opposite sex. This is a sham.

Swag, I can understand a hatred of one’s self and I can even understand the homophobia or lesbophobia, given what you may have faced in your life, but what I would seriously recommend is being seen by a therapist to help you with your contradictions: the self hate coupled with the narcissism. You are a wonderful and beautiful woman who doesn’t need hormones, surgeries, or to hate lesbians to live a healthy life.

I wish you much luck; and if you ever need to chat, shoot me an email.

2 comments on “Swag, The “Transman” Troll”

Drop me a line