Since there were, understandably, a lot of questions about how this butch woman, Doffy, responded to her doctor’s gross misjudgment of who she was as a person, I thought I would follow-up with that information.

I would first like to point out that yes, I know this person, she is a real human being, she is a butch lesbian, and she took and posted the pic herself.

Secondly, As you will see in one of my pics that I will post here, I would like to add that Doffy had absolutely no problem with sharing every inch of the picture, including all of her personal information. The decision to redact personal information including her address, phone number, date of birth, and hospital record number, as well as the doctors’ names, and the hospital she visited was mine and mine alone. It is one thing to say, sure I am fine with you posting whatever, but it is an entirely different beast to have every piece of your personal information posted out onto the internet like that. So I decided her name was enough; and while I am in possession of both the original pic and the redacted version, I still feel that way.

Now that those bits of information are out of the way, on to her response.

When Doffy originally posted this information, a mutual friend of ours asked her what a lot of people are asking: “This was outrageous! How did you respond?”

I was quite vocal at the registration desk. I said with a loudish voice…I am NOT trans, I do NOT take drugs to look this handsome and I have fallopian tubes…the secretary looked at me like I had 3 heads and laughed a bit. Said she’d make sure to note it…which she did not…and I said “I am surprised that the medical industry would assume without question! I am taking my drug free fallopian tubes to the waiting area”

Later, she followed up with:

But dont be mad or upset on this account. I made sure to inform the entire registry office and the registry office in the triage AND the 5 doctors and 3 nurses that I am in fact female… that the doctor who wrote the chart was obviously and easily confused. And the fact that she (the doctor who wrote that without questioning me) did not even order an x-ray on a finger cut to the bone and that that very finger is broken…only proved my point of incompetence both medically and physiologically.

When I was thinking about posting about this, our mutual friend asked Doffy for her permission to post the pic of her chart notes and she responded with the following texts: 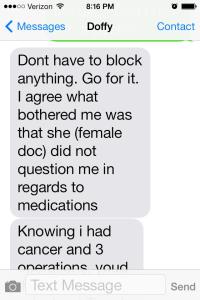 As you can see, she was OK with posting the pic containing all of her personal identification and even had a sense of humor about the whole incident; but that’s what we women do, isn’t it? Sure, we get mad in the moment that it happens, but later we laugh it off as someone’s silly mistake. That is part of what makes this so dangerous and why I felt such a need to post about it. We women need to stand up and know that it is OK to be angry in situations like this, that we can be offended about someone catering to the patriarchy like that and it is OK to do so.

What Doffy went through can happen to any of us who don’t succumb to societal pressure and conform to the binary way of thinking and being. When I was discussing this last night, a horrible thought occurred to me: what if this butch lesbian had been unconscious or unresponsive when she was brought into the ER and the assumption that she was a trans man had been made? It is clear from the texts, that her doctor didn’t do any kind of checking with Doffy when it came to meds. So, what if she were unconscious and they decided to be “helpful” and prescribe this, in their misinformed opinion, “John Doe” testosterone for the duration of her stay at the hospital?

I realize I am taking this to an extreme, but if something like that is even a possibility, how frightening is that for butch lesbians or for any woman who doesn’t conform?

6 comments on “Follow-up to “Ass”uming Butches Into Extinction”

Drop me a line Cancel reply