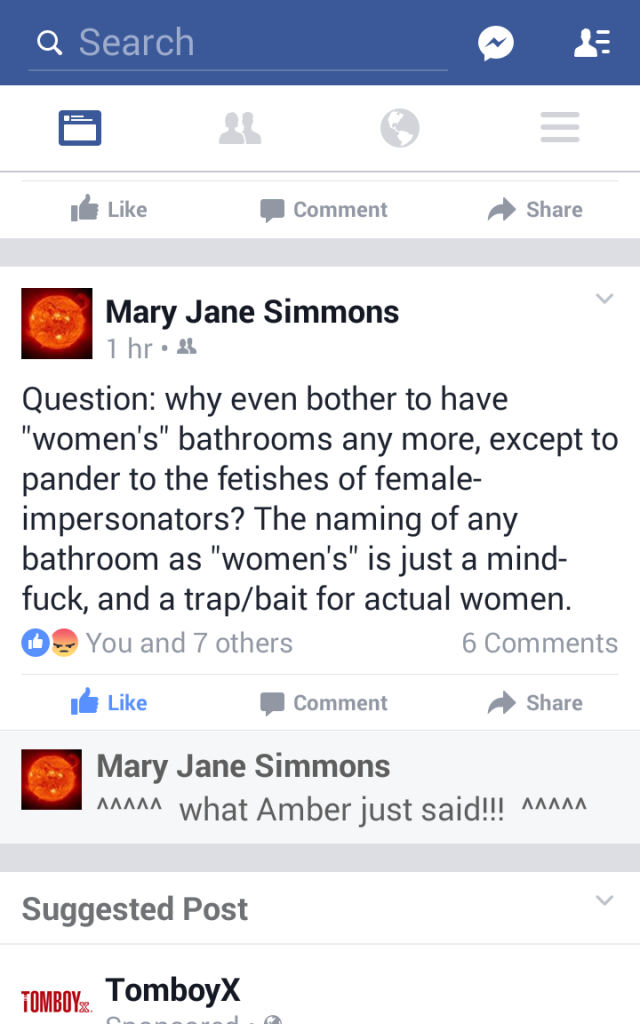 I have been dealing with trans activists for … well over a decade now and I can tell you, without a doubt, that the “bathroom issue” is not about “just needing to pee.” It is completely, 100% about perception.

Men who desire, actually demand to use women’s restrooms (and to be admitted into all women-only spaces) do so because they wish to be perceived as women. If it were actually about their safety, because they are attacked in the men’s restroom, then (a) this country would finally be able to have an honest discussion about male violence; and (b) these men would be ok with a single stall “gender neutral” or “family” restroom.

Instead, they accuse women like me – a feminist who puts women first – of violenceand hate (as a gay male friend of mine did on my Facebook, when I posted this there) , not the men they claim to be so afraid of in the men’s restroom. Women like me are labeled “TERFs” – for those who don’t know, that is supposed to mean, “trans exclusionary radical feminist” (or for some of the more violent of these men, they use “extermatory” instead of “exclusionary,” to deflect their own violent behavior onto women who are not being violent) – and we, along with our opinions, are written off as women who are violent, whose voices don’t count, who should be hated and reviled. These men (and women) can do all of that just by calling any woman who speaks out or with whom they do not agree, TERFs.

See, TERF is like a modern day witch and these men and their followers are on “witch hunts.” Women all over are afraid to speak their truths because (a) a LOT of these men claiming to be women are violent; and (b) they are afraid of being labeled a TERF; a term that will both silence and ostracize them, once they are labeled as such.

I take great issue with the slur, TERF, and I have written about it no less than twice on my blog.

First, a term like this is actually used as a slur and therefore should not even be used at all. Almost always, the person using the slur is using it to be violent toward the woman at whom they are tossing the slur, as in: “all TERFs should die in a fire (diaf)”, “kill all TERFs,” “all TERFs should be round up and shot, along with their friends,” etc. I can provide screen shots of such violence and there are also websites dedicated to showing the world the violence behind the use of TERF, such as terfisaslur.com.

For example: although I am, among other things, a gender abolitionist, I am not a radfem, yet posting something like this in public will have people calling me a TERF. I have been called a TERF many times, usually with violent rhetoric involved; and (b) we feminists are not “trans” exclusionary (or especially extermatory, since we are not violent & wish for everyone to be free of violence!), we are *men* exclusionary.

By that, I mean that we believe that men should not be allowed into women-only spaces, period. If a woman wants to call herself a man & go into the men’s restrooms or other men-only spaces, more power to her! Because these women are not violent pervs! They are not pretending to be men so that they may violate, assault, or rape men. Oh, I know, not all men are violent, therefore not all men claiming to be women are violent.

But (a) studies show that men claiming to be women are just as prone to violence as other men, (b) while not all of them are violent, enough of them are that we need sex segregated spaces (have you heard the “poisoned M&Ms” story?), and (c) not all violent and perverted men going into women’s restrooms for nefarious purposes are transgenders, but now, all they need to do is claim to be women & the doors are supposed to swing wide open!

As I said, not all of them are violent – and I need to add something here, because I thought that I did, but I don’t see it….. women like me, we are not filled with hate on this issue. We believe that transgenders should be able to have the same basic rights as all others. To be able to live as they are without the fear of (or the threat of) violence, to be able to live as they wish to without the threat of eviction, being fired, or being denied healthcare. But basic human rights should not extend into and replace the rights of others, of women.

Of course, when men don’t want women in their spaces, they have a tendency to become violent and the women leave; and these men are not called TERFs, ever – their request for man-only space is respected!

But I digress! Coming back to perception, these men want to be welcomed into women-only spaces because in their minds, they will then be seen as women, finally!

Even though a vast majority of them (if I remember correctly, the number is up over 80%) do not even bother w/the surgery and most of them (over half) don’t even bother w/hormones. They are just men calling themselves women & *poof* they’re supposed to be seen and treated as women. Oh and we better damn well be able to read their minds and know they are women or we’re gonna see some tantrums and maybe even some violence!

Tantrums and violence that you won’t see from me and butches like me who are “misgendered” – actually, the appropriate term would be “missexed” – all. the fucking. time!! Seriously, the woman that I am is so invisible to most people, but you don’t see me getting violent, threatening people, calling them names, suing them, going to the papers so they could do a story on my being missexed…. you will see none of that from me and butch women like me, simply because people think I’m a dude!

So, these men do not “just have to pee” or “just need to change” or “just want to listen to the festival’s musical talents” or anything else.

A belief that doesn’t stand up to biology or reality, only to a delusion.