Astonishingly, and I say that sarcastically, since this does not surprise me in the least, trans women actually hate women. It isn’t just about men controlling women, this is flat-out misogyny at work here.

It’s no secret that trans women, being men, believe they not only have the right to use the words woman and lesbian to describe themselves and they not only have the right to women’s spaces, these men also believe they have the absolute right to women’s bodies. This is what the cotton ceiling is all about: men demanding that women who don’t want to have sex with them, have sex with them anyway or be accused of being bigots for not having open enough minds to see these men as women.

Let’s be clear, shaming, guilting, or tricking a woman into having sex with you is rape. Period. Full stop. Women, lesbians, have the right to refuse to have sex with anyone they choose for whatever reason they choose. Why? These are our bodies.

So is it really surprising that these same trans women, who are straight men and sexual deviants, do not support or even care about butch lesbian women and actually want to see us disappear altogether?

I am used to it, of course. Men have always LOVED the idea of lesbians, but only in that they are picturing thin, feminine lesbians who eventually just really want to be with men and don’t really want women at all. The thought of butch lesbians repulses men because, as some ignorant people believe, they think we just want to be men. They also do not find us attractive because we appear masculine. So, of course, those women they find the least attractive should be destroyed, especially those of us who threaten their very existence: we don’t need or want men and women want us.

Taking the ignorance of these men a step further, it isn’t really a shocking revelation to see that since they believe all butches want to be men, then surely we are on our way to becoming men just by being butches and we will eventually all transition, making butch lesbians obsolete and, as I said the other day, extinct. 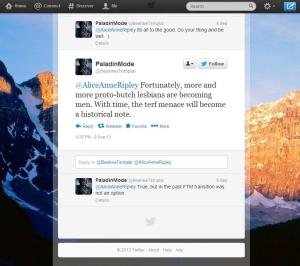 So much for the LGBT community, huh? That’s transactivist, David “Dana Lane” Taylor, by the way, under one of his many troll accounts expressing his belief that the way for the “terf menace” (another slur created and propagated by trans women to describe radical feminists and, especially, lesbians) to be gone once and for all is to get rid of butch lesbians; and the way to do that is to have us all transition into “men.”

What these men really want is for all of us butches to just hurry up and transition already so we can be trans men and support these misogynistic sexual deviants in their clear cut efforts to own and possess women.

What these men fail to realize however, is that women who transition into “men” are not butch lesbians who want to be men. There are butches who transition, yes, but almost every instance of that is due to the kind of societal pressure these men are expressing; the whole idea that if we look, act, dress, and talk “like men” then we should just BE men. This stems from the belief that there can only be two ways of being woman/female or man/male; and there is never any kind of overlap or in between.

Little girls, who would have at one time been considered tomboys and been allowed to become whatever kind of woman they wanted to be are now being forced into a trans lifestyle by their parents under the guise of “understanding and support.” Young butch women who are happy being butch are pressured into transitioning by a society that includes lesbians telling them that they should just be men and get it over with already. Young women who are straight but hate their lives as women transition as a way to escape the patriarchy into which they have been born as second class citizens. Those are just some of the reasons why women transition into “men,” but make no mistake, they are not transitioning because they are “men trapped in women’s bodies,” they are transitioning because the binary system tells them they should.

This is why the very idea that the binary system could be a lie, a social construct designed by men, is what scares these men to death. The idea that women can be who they are and not want to be men, not want to transition, is unfathomable to these men. Add that to the idea that there are women out there who honestly do not need or want to be with men, dress or not, and you have a full scale panic on your hands that creates rapist thinking like the cotton ceiling and lesbophobic thinking like the above sentiments Mr. Taylor put forth.

And let’s be honest, the above sentiments are lesbophobic and homophobic. To put forth the idea, the hope that eventually all butch women will transition and thank god, so we don’t have to look at or deal with them any longer is unbelievably homophobic and lesbophobic in that it expresses the desire to exterminate all butch lesbians.

At what point, do you think, will lesbians and women stand up to these men and say, “No more!”? There is going to come a time when lesbians and women realize that these men are just your average everyday men who want to own, possess, and eventually do away with women. The fact that they are using the trans lifestyle to promote their misogynistic and homophobic views should wake women up and make them realize they are fighting for the extinction of their own sisters.

So what are you, dear reader going to do about it? What are you doing to ensure that these men will no longer get to dictate with whom you will have sex or which women are ok and which women need to be exterminated?

Drop me a line